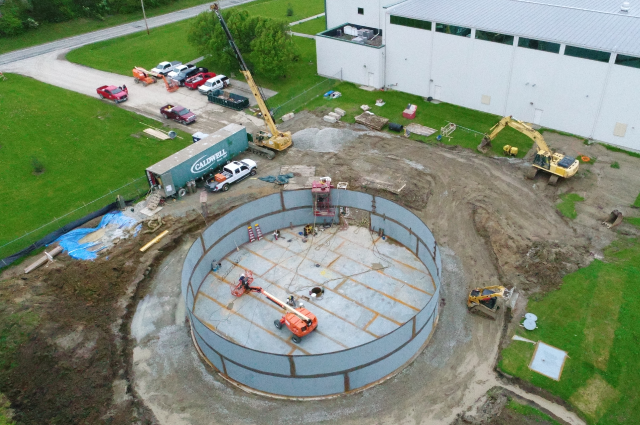 The city is preparing to take the first step toward funding the construction of sewer lines that will connect to the new satellite facility on the north side of town.

The City Council is set tonight to vote on a preliminary bond ordinance as part of the city’s application for an Illinois Environmental Protection Agency loan for this construction project. The new piping will serve the combined sewer overflow treatment facility on North Sixth Street.

Public Works Director Dean Barber reported in a memo to the council that the final bond ordinance and loan agreement will be presented later this year at the same council meeting as the contractor’s bid for the construction work.

“No debt will be approved until we know the bid price. No bids will be accepted until we approve the financing,” Barber said.

“I still anticipate that the bids will be closer to $10 million than $12.5 million,” Barber said of the piping construction. “However, I need to authorize the higher amount. We can borrow less than the amount on this ordinance. We cannot borrow more than is authorized in this ordinance.”

The satellite facility is designed to prevent untreated sanitary sewer water from overflowing into Riley Creek during rainfalls. IEPA mandated a few years ago that Mattoon take steps to control sewer system overflows. The city also funded the construction of the satellite facility by issuing sewer revenue bonds as part of an IEPA loan agreement.

In other matters tonight, the council will consider rejecting the low bid for upgrading the water treatment plant’s supervisory controls and data acquisition system. The project would be awarded to the next lowest bidder, Durkin Equipment for $224,000. R.E. Pedrotti had the low bid of $206,261, but Barber said in a memo that this contractor was disqualified for not completing two previous Mattoon projects on time.