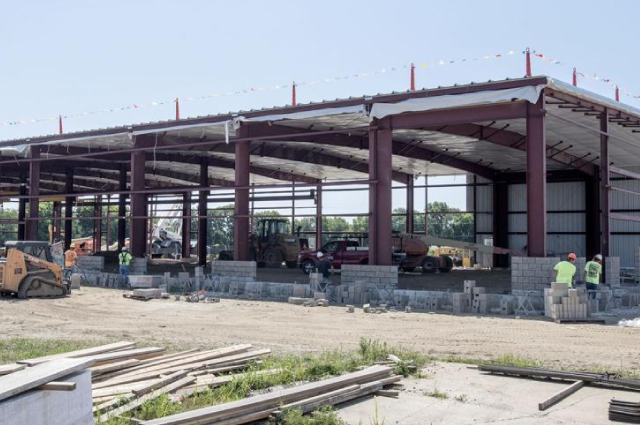 URBANA — The long-vacant site of a former hotel is finally being put to use.

After the former Hanford Inn was torn down in 2015, truck service center JX Enterprises bought the lot and is expanding from its current location north of Urbana on U.S. 45.

The new site at 2408 N. Cunningham Ave, U., will be four times bigger than the existing one, assistant service manager Chris Wargolet said, and will be more visible near the intersection of Interstate 74.

“It’s long overdue,” he said. “We have two shifts here, and it’s tough. (It’ll be) a nice new facility. Everything’s going to be new.”

A building permit was issued in May for the $3 million project, and the company plans to invest more than $4.35 million in the new location, Marketing Manager Lisa VerHalen said.

The new location is expected to open in October, Wargolet said.

Right now, about 21 people work there, Wargolet said, and “that’s expected to double.”

Based in Wisconsin, JX has 23 locations in the Midwest.

JX will own its new location rather than lease, Wargolet said, and is moving because “the industry itself is growing.”

Since 2015, the tonnage hauled by American truckers has increased more than 15 percent, according to the American Trucking Associations’ Truck Tonnage Index.

“This facility will be four times larger, include extended hours and, as the demand increases, possibly add a third shift,” VerHalen said. “JX will be adding 20-30 vital jobs to the surrounding area.”

“We’re very pleased that JX has chosen to locate in Urbana,” she said. “This location on Route 45 and I-74 is well-suited to businesses serving the automotive and trucking industry.”

It’s been a long road for the city to get to this point.

The hotel closed in 2010 after the city condemned it for fire code violations.

At one point, the hotel was evacuated after the Urbana Fire Department found that multiple rooms didn’t have smoke detectors, and that the existing smoke detectors didn’t work.

Two years later, the city received a court-ordered demolition order, and in 2014, sold the property to Kelly Dillard of Dig It to demolish the building.

Before it was a Hanford Inn, the hotel was a Travelodge, Regency Inn, Thrift-O-Tel and a Park Inn International.

It opened in the 1970s, and for a while, the University of Illinois football team used to stay there before home games.

But he said it fell into disrepair.

“There had been so much water infiltration, the suspended ceiling was coming down,” he said, and looked like stalactites hanging down.

“The property had really degraded,” Boys said, so he was glad to see the construction on the new project.

“It’s a happy ending for the parcel to go back to productive use,” he said.